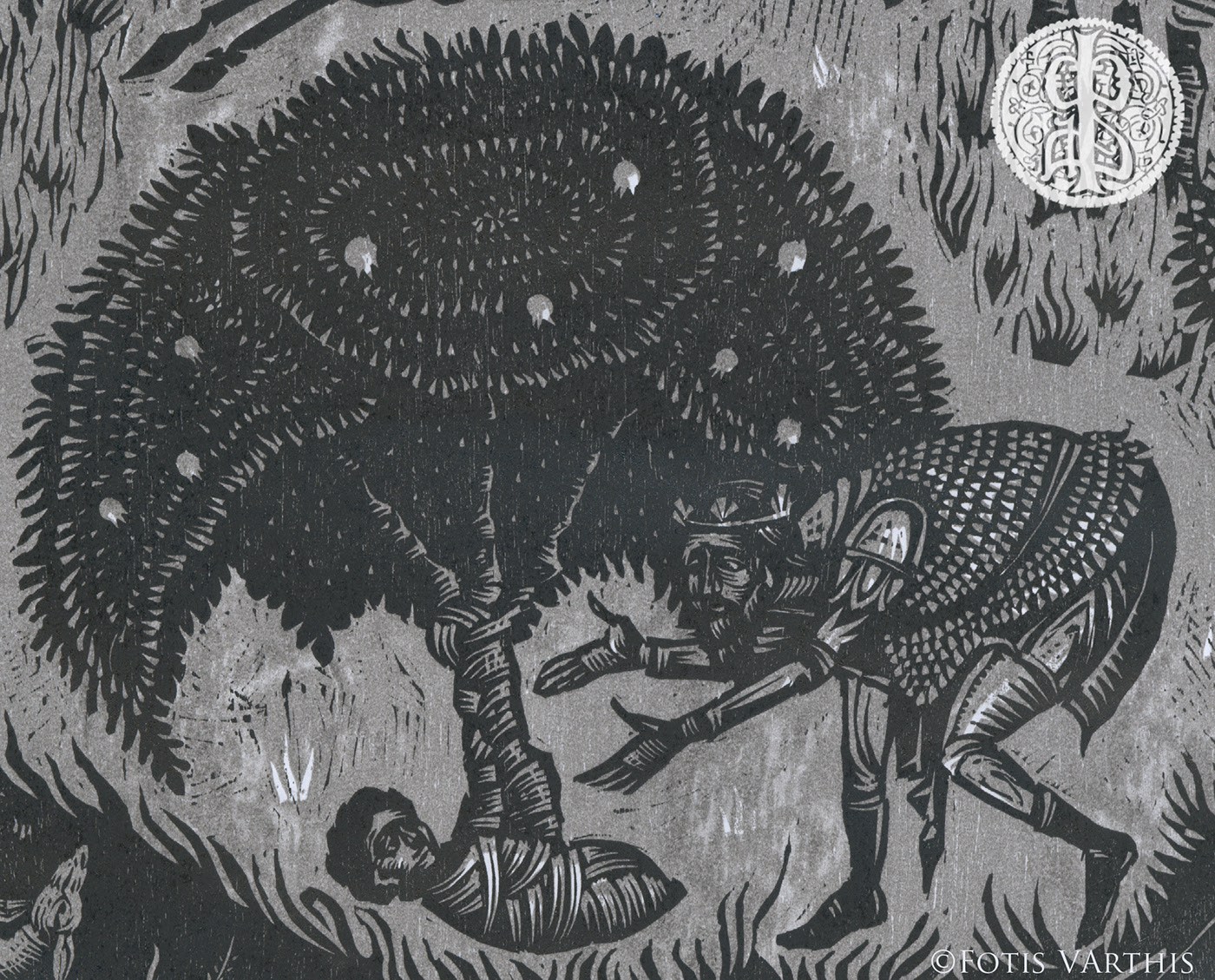 When the flowers of the pomegranate tree in the backyard started to fall, sweeping the porch on which we stepped with our sandy feet had no meaning anymore. As seasons passed, we closed the shutters one by one. In the last days of the icy-cold weather in which we persisted on swimming despite the wild wind, when the salt dried on our skins in a minute, we looked straight in the eye of the house. Turning back was hard. Turning back meant growing once again. It meant the absence of my hands in my grandfather’s hands and more lines on his face. I didn’t yearn for the night without barbecue and the street full of cats that didn’t lick themselves, and I picked flowers of the pomegranate tree from the ground one by one. I tried to stick them on the branch with a miserable anger, and I sought the key of turning back in the tubular flowers.

Who was the first to say that I was going to be born? I was without dimensions, without organs, and breathless. I had a warm pillow beneath my head and my fingers were not separated. You whispered, we name her after she holds on to life, but you already decided my name. I heard you in my hesitative life, I held on to my tailor-made skirt. I guessed the color of the cloth that I would be swaddled in and I calculated how many pieces I would divide the uterus in order to take my head off it. From my shell, restless, temporary and long, in the flexibility of a turtle’s neck. I attempted to say what I wanted to, but my ear was severed and fell, I couldn’t hear what they said about me, my future, and in which city I would discover the tactics of time. I pressed my finger on my belly button I stood behind, and shouted my gender perhaps a hundred times.

You chose my color, you knew what would suit me. Who was the first to dream of my birth?

I was sleeping and I couldn’t see my home yet. They called me, gave me my first name, and laid bellies side by side for me to choose one. You were  sure of what you felt. But I strongly raged at your confident attitude. I stood near the ones like me. The ones whose flesh remained within, the ones who held on to the world with a cord. In the black abyss, into which we were invited to choose the bed for our remaining sleep of a few months, we watched the things we would be able to dream of. Would we like to be the ruddy children riding deer at long meadows, the gizzardless one disemboweled with hunger, or one of the humans not sure of their genders? Would we like to support the ones turning away from milk in abundance or the ones who suck mother’s finger as a teether? Would the name of our owner be written on the tabula on our necks, would we step from cream to marble? When? When would we release the pain of growth by holding on to a flowery moment? When we were equipped with wooden swords at a boot camp or when we were biting the back of a pencil, we had to choose the one for whom we would be grateful. However, I couldn’t find time even to think about your rough attitude until that moment.

He stood over us, he hit the ground with his wand and both his curse and blessing passed over our heads. We opened the sins of our previous lives with the intercrossing dichotomy. We opened our rakishness, burglary, and falsity one by one. Our thoughts were like cards, images were brightened with colors before us. Some of us presented the parody of the black abyss and some of us fell from the grey sky of tongue-tied life. Arrow, bow, crown, queen. In their fortunes, some saw hanging bodies with scurvy from the dim apartments built as dominos and we were struggling with coffee grounds. We tried to tear off and bare the bitter past of the coffee that tried to cover our feet.

My grandfather was a huge mammoth. He didn’t have a beard. But he knew how to bristle up with the hair on his back. I loved feeling little and being the small mammoth near him. The forest in which I got lost when I jumped on his back from the backyard of our summer house was enormous. His back was the door opening to an adventure full of tales, dwarfs, and faeries. He plucked a reddened pomegranate and gave it to me in the end of the season. I threw it and shouted, may god give us abundance! Where did I know that from? How could I know that the pomegranate that burnt my throat had the same richness as the ground I fell upon?

He had huge teeth – he had to – I wanted to remember him like that. He overthrew everything, but he embraced me, carried me over his head to save me from drowning. When the waves were over our heads, it was the Mediterranean. The end of the season which was not more important than the broken legs, ragged wings of the animals I gathered from the beach, streets, and so on.

I began speaking first. I told my archaic name and stepped forward by crawling. I quickly counted my one thousand and five hundred lives, but hid two of them for slowness – I loved the last two the most. We had the right to speak about two lives as long as we wanted, but we had to pass over the others by telling name, place, and manner of death. The last two lives… How they occurred in sequence.

I told my archaic name created by geography.

After passing over my one thousand and five hundred lives in which I was a male, I came to my second to last life and saw that I succeeded to take off the edges of the monolith flesh below my head shaped like arms. I filled with joy. I was away from his wand, he was not near and he didn’t force me to make a sudden decision. Even it was enough. Tell a story. A story. Tell the best story, shoot us all and be the first to choose the belly from which you will be reborn.

Second to last. I waited in limbo between them.

I shouted, do not leave the castle’s frontier!

He repeated my words, do not leave!

I said, o soldiers! Gird on, your king is coming!

With the simoom blowing on our hair, who knew in which version of my endless scenarios he put a towel over his burning shoulders, he squinted because of the blowing sand, his kidney was burning and deteriorating. I asked the sand, which I slopped from the shovel, who their king was. Where did he come from and where did he go? To which tree did he tether his horse when he saw the lady strained from the moonlight? In which one of the tales had I carved my grandfather?

He was the first to know that I was going to be born. He knew it by putting his hand on his daughter’s crushed belly. The root of the seed that planted me in that belly was already absent, it just visited the uterus for a moment and left. My grandfather named me before seeing me on the black screen, that’s why it was not heard in the wind – Simoom. His daughter, who I call differently, my mother, crushed her belly too, I heard this one night when she was telling her own mother she didn’t want the forcefully planted me in her soil. I didn’t fall, or maybe I held on to her liquids, I didn’t break away, just to spite the poisons, drugs, and strains. I went beyond my mother’s doors by passing her golden way.

Second to last. Choose the belly in which you will take a rest if you can. I held on to an unfortunate canal without a king, then I went beyond there and filled myself into the soul of a shapeless flesh. In the sky I couldn’t see the star of the chance with which I changed myself, that’s how I endured both the pride of being the first and the suspicious existence.

In the backyard, there was a pomegranate tree the same age as me. We left it every season. The abundance of the house, my fortune, men and women, all at once, the uterus I came from couldn’t come with a pomegranate. The one I broke on the threshold and stomped on.

When I wanted to bury it near the leaned tree trunk, they found it strange. They didn’t allow it. I thought I could find a way. I warmed the soil and lied down, I melted the door of bronze in through its magma. I reached its shield, pierced its earth. I buried my mammoth so tight that its teeth could not erupt. Planted flowers made of bells on it, and broke abundance over it one by one.