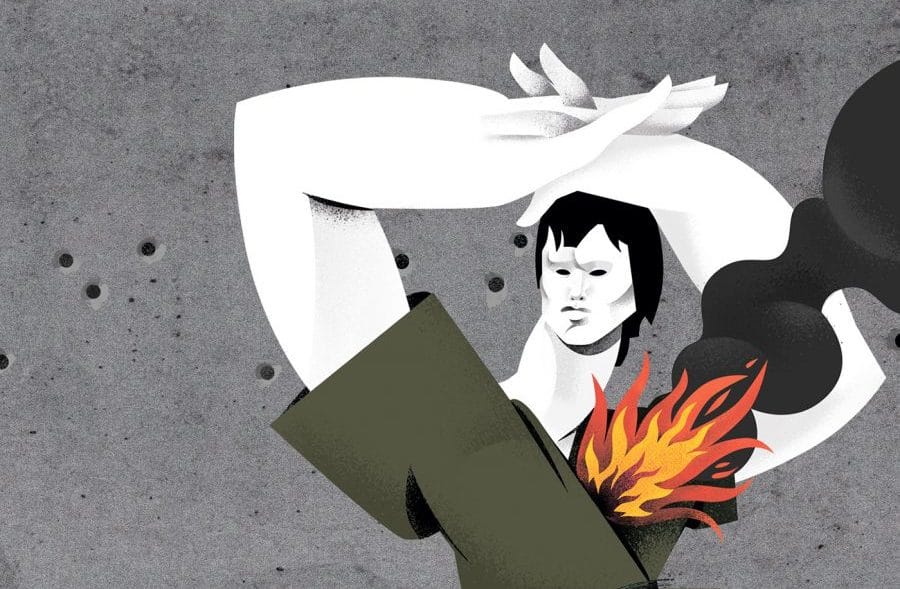 I was born and I died many times. The first death happened in a torrid graveyard under the sun, they held me behind the crowd while taking sides. They allowed me to see the one I buried from a distance. They beset and brought me among the women behind the fig tree. There was a wall of flesh before me. I dashed and broke through the soldiers, for I had sand in my hands to throw at them. The one who touched her last time was me. They blamed me. I was a child, unaware of separation. “Why are living hands separated beside death?”

I took a step towards growth without bleeding. I had a lake to swim before my uterus. I dreamt I was saved from the orange wreckage among the people walking barefoot on broken glass and arms. I realized that I heard the mallet of the earthquake in my stomach when I got near the dead bodies and saw their motionlessness. I passed them by and sat down on the plainest place I knew to save myself from the demolition. While trying to understand the things that happened during the last hour in the garden of the white hospital in the small city, a single and sharp scream disrupted my nightmare. We saw the head of the baby trying to be born amidst the dead bodies from between the wide open legs of the woman near me. They covered her, they made her wear a sheet from head to foot to hide her private parts despite all the blood and wreckage. I couldn’t look, and I turned back beneath the wreckage.

We fairly memorized an issue. They explained to us the things we must hold while running and playing, for they must not bounce, the blood that would disgrace us if spilled, and the grief during each funeral. We adhered to all. But I had novels, heroes, and adventures I would travel with. Maybe no one saw my little stubborn denial, but I knew it, I ruthlessly threw myself amidst the football matches. It was unusual to grow up as a boy. Recklessness and organs moving freely… I was punished for my mischief, but I ran away again, I climbed over the iron doors by thinking nothing of my skirt’s existence.

They reproached the state of being a woman at the playgrounds covered with leaves. They fairly chose the corner of my throat where my scream would stop. My kick was strong and I was short, so I escaped from their armpits and ran away from the language they forcefully boosted. I clearly saw the doom and gloom when my breath calmed down. I hushed.

The protector had a name. Though I uttered again and again, he didn’t stop my growth.

I couldn’t know my place, I continued creating maelstroms though I saw that I circumscribed around my own axis. I studied, graduated, and worked. I walked the streets in the middle of the night and I was not scared of hidden shadows. I declined roles and took to my own way, I was cut to the heart every moment I blithely carried myself overseas and all eyes were not on me. I didn’t like the chains of the place where I walked back and forth.

A time came when they said we were the women of harsh times. We were their right, they enacted our restraint. We were the booty of phallus. (Leash the hands first, or let another one of her kind hold them. Until rags and tatters remain. Then burn if you want to, wrap with a sack.) We shouted, we are the eyes of Hera, the box of Pandora, the hair of Medusa. We are female Centaurs.

I was born and I died many times. I held the hands of the ones whose hearts still beat, we released a lament from the heart of the forest and the caves of animals together for the ones whose noses were already filled with soil.

I live in harsh times. When I see the hidden shadows in the dark street in the middle of the night, I pull my arrow from the flat place above my right breast. I’m not scared.