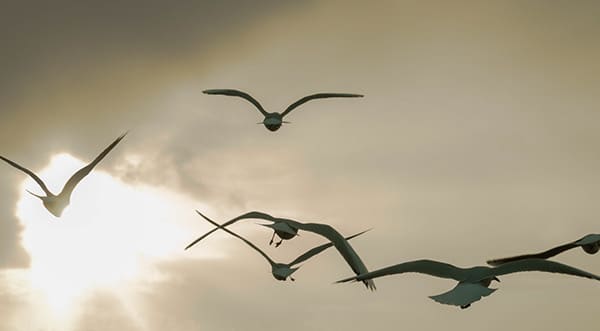 I rested on the windowsill behind my wooden desk. I closed my eyes and smiled with pleasure as my eyelashes were blowing in the wind. As soon as I opened my eyes, I saw a flock of seagulls racing with the ferry, there were fifteen or twenty of them. I got up with the feeling that I was running towards them, but I sat back. Without missing, they were catching the leftover bread pieces thrown from the deck and mocking the wind through artful flaps. The seagulls were boundlessly nose-diving with their bodies floating! Thinking to myself, how free they are, I immediately wiped away the tears on my nose and started heading back inside, because I couldn’t stand envying them anymore.

As I got up, a seagull flying behind the flock nose-dived before me. I squinted, either this was an illusion or the sun was fooling me. Except for the little whiteness beneath its beak, the seagull was black as night. I trembled. It stood there for a few moments, ignoring the thrown pieces of leftover bread, gazed away and opened its wings. Then it stared right at me. Having opened and closed its beak, it then flew away.

Getting off from the ferry to Gokceada Island, I was still impressed by the eyes of the black seagull. It was trying to tell me something – as I interpreted – about otherness, about differences; it took courage from flying among the others in spite of being different… I forgot about the seagull after I took my bag and the notebook I used when deciding my destination. Now I had a great island to discover. After settling in a hostel with small pink rosebays in its garden where no one stayed but me, I visited the bays for a few days. In the five-day break from the city and work life, I did everything to delight myself. I memorized the reflection of coast lights above the sea and the sand flowing through my fingers as I lay on the hot sand.

As I woke up, I felt melancholy on my last day on the island. I felt the trip was insufficient though I tried to do and see as much as I could. The insufficiency reminded me of the feeling when I believed I forgot something important at home after leaving in a hurry. I got dressed and knocked on the door of the hostel’s mistress. She opened it with a bright expression upon her face.

“Hello,” I said, and I recounted the island’s villages I visited.

Her violet eyes were dazed and she leaned on the door.

She told me Barba Hristo made mastic-gum pudding and he offered them in his garden at Zeytinli, an old Greek village. Then I took a taxi and headed to the village. I checked whether the camera was in my bag. It was.

Claiming the village’s roads were too steep to drive, the driver left me at the piedmont. I started climbing the centennial path paved with orderly stones. I espied a woman in a flannel dress with big breasts and short hair, smiling as she stood on the doorstep of her house.

Holding both her knee and chin, she eyed me from head to foot and gave directions by calling me my little one with a Greek accent. I thanked her. By resting at the abandoned launderettes, I climbed up the hill she directed me to. Then I reached a white house with wooden shutters. I asked the young couple sitting in the garden whether it was the house of Baba Hristo. After they confirmed, I sat on the chair next to them. Staring at the open door, I waited.

A shadow appeared at the door.

I couldn’t speak, I nodded.

“Do you want mastic-gum pudding?” he asked. I nodded.

He disappeared and I felt like I was living in a frozen moment.

He came back with a tray carrying a plate of snow-white pudding with cinnamon and a glass of cold water. He put them on the table.

“Come on, eat it,” he said. Sitting on the chair next to me, he stared at the plate as if he wanted to make sure I ate it. I slowly ate the pudding and I tried to prevent my hand from trembling.

“So delicious,” I said, “and it almost doesn’t have sugar.”

Barba Hristo had a hump collapsed on his eighty-year old body, but his legs were muscular, the white hair above his ears was as white as his puddings; he held his knees and straightened up.

“Do you want dibek coffee now?”

I wanted to say I could make the coffee myself, but I didn’t, because Barba was happy doing those things. I said, okay, and the wrinkles on his face lightened up. Ten minutes later, he brought the coffee; it was the best coffee I had ever drunk. We both reached out to the glass near the pudding.

Our hands touched, we neared eye to eye. I felt a spasm in my heart.

He pierced my eyes with the same glance as the black seagull. I had a lump in my throat with the feeling of freedom billowing from his blue eyes.

I drank the water and it was time to leave. I reached out for the camera in my bag. I was going to ask the couple to take a photo of us, but I thought I didn’t have the right to encapsulate Barba inside an inanimate frame.

I didn’t need an inanimate piece of paper to remember Barba.

Despite the hump, the black seagull which had an infinite freedom and embraced the wind with its great wings had to fly across the island.

He went inside and turned back with a bag. He gave me the bag.

“My little one,” he said, “I collected the leftover bread. Throw them to the seagulls on your way back.”