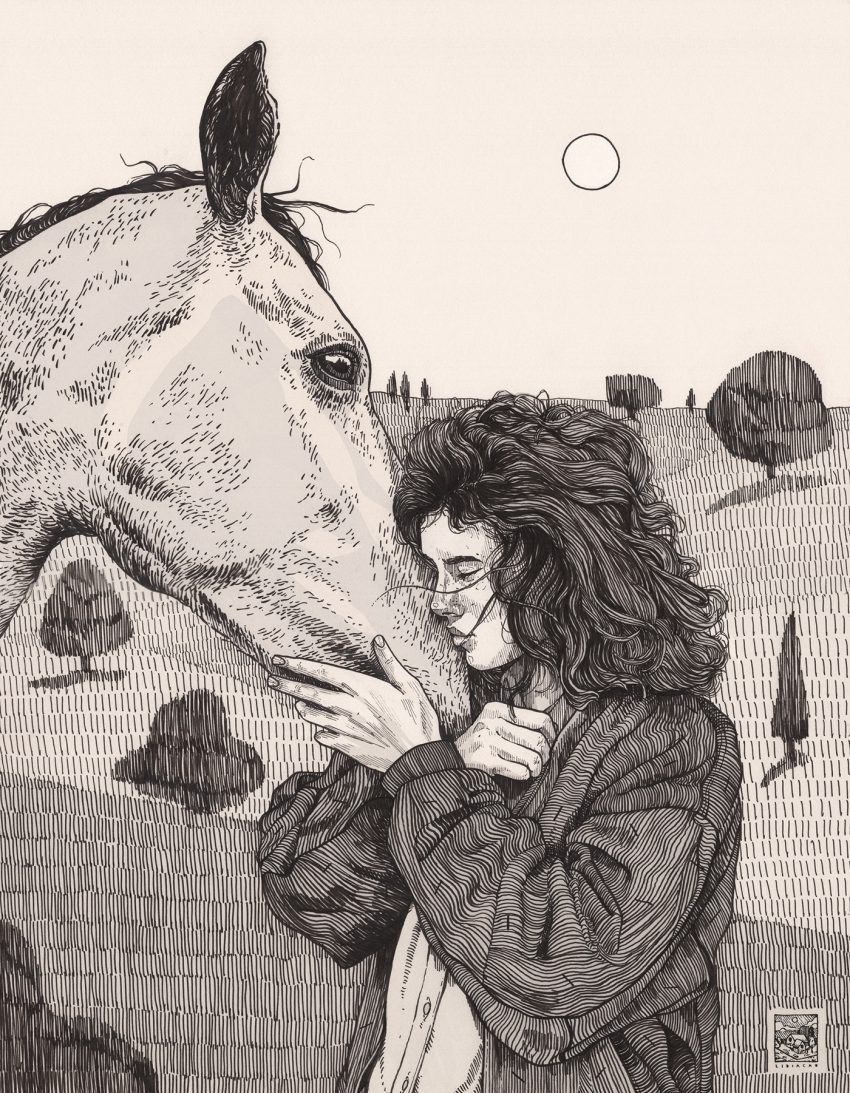 Beyond the city shaded by a mountain, a farm lies on the silent skirts, granting safe passage  to passing clouds every day. All rain and wind must pass through here before coming down and refreshing the city, always being the freshest for the farm, sparse in the city. The fact that a mountain overlooks the farm doesn’t make it feel small; on the contrary, the mountain equips the farm with a dark side that sets it free. At midnight, one can hear the stories whispered all around the corners of the fenced area; two owls, regulars of the red roofs inside, collect them in a tome. But the farm doesn’t appreciate the stories. I’m whispering because I’m trying to delay breaking into pieces, which will happen eventually, and I won’t make it into the tome.

Worn out boots wrap around legs, they are walking on the dirt. A reserved stance, far from arrogance, steps solid on the ground, scorching branches and leaves with passion. These legs are mere silhouettes, and four more dark limbs follow them. Behind all the legs, a long log of hair, thicker than maybe a wrist, sways to the left, then to the right… The woman’s shirt is unbuttoned down to her chest – an occurrence outside her awareness, the buttons found the guts to collaborate with one of the Nature’s laws – beneath her knees she’s stronger and prouder even than a thousand-year-old edifice. The woman walks, softer soil turns into pebble, dry soil finds its way to the closest river. The rhythm of this pace hits unprecedented notes in the world of two-legged creatures. She’s learnt how to match her steps to those of her horse, hair competing with the thickness of the animal’s tail, spread from the point it’s tied at, the sight of which smothers one, makes them want to get some fresh air. The woman walks, irritatingly green veins inflating under the thin and sheer skin of her hands, wrists, and face.

The horse is neither saddled nor harnessed. Its rein is the sealed connection to the woman. Its head is down, steady and equally reserved, the occasional upper lip lifting and smiling because it taught her how to walk like this. The animal is everything to the farm, an identity to the woman. With its small red hair and hay blonde mane, it can withdraw all the light it reflects and leave the farm in complete darkness. It watches over the night. Behind its deep chest that downward separates into two there lies the power to make the night into day. It possesses another power than its kick; you can hear it in the rough breath fuming from its nose. It counts the stars in the sky, lying on its huge back, showing off on the ground, peeking at the woman once or twice. While the pebbles scratch scratch scratch its back, it’s waiting for the woman to come and sit in the middle of the four legs it raised to the sky. It loves, other than her just sitting there and holding it, that she is fearless before its raw animal power.

Yet, instead of holding it, she calls the horse to near her. She kisses its almond eyes. She gathers its hair in her hands and leans on the horse’s withers, pulls herself up. A mere touch on the animal’s neck and they are pacing into the wild weeds. Four-legged, uniform silhouette jumps a perfect ten over the fence.

The woman’s scent infused with the horse’s spread around the woods. This mixture is everything that comes together to make the woman, her self-identity on this planet Earth. It’s her character that composes her dreams in unity with the essences of worn out leather and harness that settle on her skin and hair. Riding at a canter, intermittently sitting and standing up, her cheeks breathe out fire. The chill of the night hardens her nipples, creating two tiny dots over her shirt. The horse’s neck is tensed then loosened, its muscles branching out to accompany the constant movement. Both experience the full extent of their femininity in this divided but integrated walks.

They stop to listen to the songs of nocturnal birds in the woods. They are tensed with the urge to rule over everything that surrounds them, the feeling that makes its way up to their abdomens from deep inside their groins, an instinct like the exuberance of the trumpet that catches up to the tranquil flute to dominate the entire melody. Mother Nature is demonstrating all its possessions worthy of a spring evening; the horse owns up to what is given, belonging is in its bones. Without waiting for a signal from the woman, it rears before breaking into a gallop.

This gallop isn’t to hurt her, no one regrets not having stirrups, but is a reminder of the blood that spilled in strains to its back from the inner thighs of her thick stitched pants from years ago when riding at a similar speed. The animal takes a wide turn by the olive trees where the woods soon end. When they return back to the farm side entrance of the woods, they stop and watch it from afar. The woman fits the barn recklessly spread on the mountain skirt between her thumb and index finger. The iron flavor of the dark shadow inside the frame diffuses in her mouth. She doesn’t flinch, her stomach still.

Yet, the farm is cranky. It refuses to be looked at. It will resurrect and eat its own carcass, I whisper. Only the woman and the horse hear my words.

From “The Animal Side”