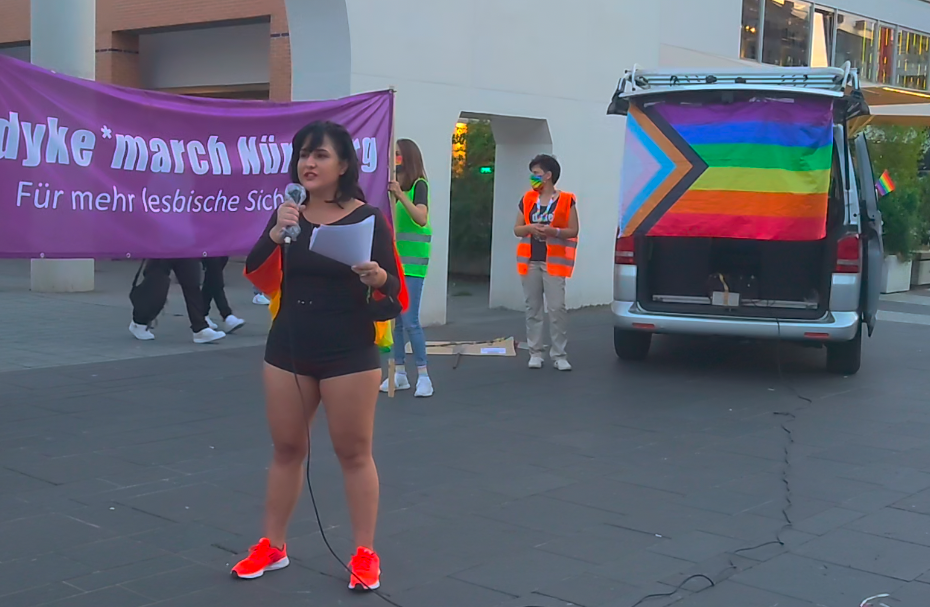 German translation of the full text is available below.

*Special thanks to Julia Seidl for the German translation of the speech.

I am happy to join you today here in Nürnberg for the Dyke March 2021. Thank you for welcoming me to this beautiful city.

I am here now.

We are all here.

We are on a step now. It is the last step.

The very last step of humanity.

We have stepped up on there.

By struggling and winning.

We have been climbing the ladder of being human for centuries; before and after the blessing of the vagina by the people in Potbelly Hill during the 12000s before Christ; we have been doing this; creating our own gods and belief systems.

There was a woman living in the Anatolian lands thirty-six centuries ago, from where I come. The woman, named Puduḫepa, was the daughter of a cleric father, and then she became the queen of the Hittite Empire. As narrated on old Hittite tablets, Puduḫepa was a dreamer child; gazing at the star of Ishtar, which we know as Venus today, she promised herself:

“I am Puduḫepa. I will read when no one knows. I will write as wise people do. I will think like great people. I will overcome the obstacles on my way. Let the stars be my witness, here I take an oath.”

Puduḫepa reached wisdom. That woman, who was said to have many virtues which were not present in the women of those times, protected widows and children, gave the opportunity of freedom to slaves and looked after orphans.

Puduḫepa had an important role in the Hittite court and international diplomacy of that period. Puduḫepa had the use of her own seal, controlled the domestic arrangements of royal palaces, and judged court cases. One of the most destructive wars of the history between Hittites and Egyptians was resulted in the first written agreement, called the Kadesh Agreement. Peace broke when the queens of Hatti and Egypt, Puduḫepa and Nefertari, sent congratulatory gifts and letters to each other. Over the next fifteen years, they adopted modus vivendi and drafted a peace treaty. Puduḫepa continued to be an active diplomat and co-signatory to the treaty of Ulmi-Teshub. This was the first peace treaty in recorded history.

Puduḫepa signed the Kadesh Agreement with her own seal.

Puduḫepa is the first woman in history to have a seal of her own!

I am carrying this seal on my neck now.

I grew up with the stories of strong women living in Anatolian and Mesopotamian lands both of which were the home to the oldest civilizations where the first forms of society were seen. I had no dreams but of being an Amazon as a child. I wanted to leave a seal, a story in history like Puduḫepa.

Magna Carta, Renaissance, Reforms after the medieval ages were all created by humanity, which was also the witness of the consequences of the French Revolution. And of course, the Universal Declaration of Human Rights.

But we deserve more.

Thirty-six centuries ago, Puduḫepa’s sign prevented great disasters; the reception of history is changing and will change as women begin writing.

It was us who tried to make the climb on an equal basis.

It was us who read Mary Wollstonecraft’s texts and Virginia Woolf’s thoughts on having a room.

It was always us, we, the non-male beings, who gained their rights by themselves.

But today, the male tyranny of Turkey pulled out of the Istanbul convention which was the convention that secures the rights of women and LGBTQ …

The meaning of pulling out is, they are risking the lives of women of Turkey and giving way to great disasters.

Being afraid of the colors in the rainbow, the Turkish government commands police to take the ones who wear rainbow socks, carry rainbow umbrellas, and queers into custody, and police beat and arrests the women and queers who “resist dying.”

The fascist governors, who are madly afraid of women becoming stronger socio-economically and do not shy away from restricting the basic human rights of LGBTQA+ individuals, grant approval to the murder of one of us every day. Husbands, boyfriends, brothers, and fathers are sometimes sentenced to a few years of imprisonment, but they mostly leave courts without being punished.

The patriarch, feeding on the exploitation of body and labor, continues to inject the poison of toxic masculinity not only in Turkey but also in Poland, Hungary, Cuba, China, Latin America, Africa, and in many parts of the world.

The father is still not arrested to perform the decision of the family council to kill Ahmet Yıldız, a university student, for he was gay in Istanbul thirteen years ago; he could not even be found. We are still seeking justice in the case of Hande Kader, who was a trans-woman being burned to death in 2016, five years ago; we know who the actors were.

We fight each day to become visible in a world where the ones who are unconcerned with all murders resulting from “religion, faith, chastity or love, jealousy and desire,” the governments, unions, and media quickly impose a broadcast ban on the news of child sexual abuse or violence against trans-women. Being conscious that as a woman, queer or trans, even walking on the street by wearing whatever we want is a political act, we come together and shout in the cities of the world to resist the ruling coalition’s hate politics.

The World is all messed up because of masculinity performativities.

The male kind spreads its hate and oppression over women and LGBTQA+.

Something happens in our world. Something is changing now.

The masses of women and queers are rising up.

No matter where they gather today, whether in Istanbul, Turkey or New York City, Berlin, Budapest, Warsaw, Tunis, and Cairo — the cry is always the same:

We are the grandchildren of Puduḫepa, all of us; we were born fighters because all we demand is peace.

In Turkey, Poland, and Hungary, and all over the World, the big change will be made by us; the dykes, gays, trans, feminists, women.

We are all here now.

Standing on the last step of humanity.

We have to keep climbing with the power of information and queer feminist, ecofeminist theory.

We don’t want to hide, we want to be seen.

We don’t want to be disgusted just because we do not obey binary oppositions.

We want to be embraced.

Something happens in our world. Something is changing now.

I believe that all dictatorships will be beaten by feminism. As feminists, women, and queers, we are so strong and we won’t give up fighting.

We have the strength to fight in our DNAs. Because, it is us now, holding Puduḫepa’s seal in our hands.

That’s why we can take the next big step together to build up a brand new ladder of humanity: non-binary, shaped with equal opportunities and equal pay, in an honest, stronger, and most importantly colorful way.

Let us all look at the Ishtar now and promise together:

“I am Puduḫepa. I am Nazlı. I will read when no one knows. I will write as wise people do. I will think like great people. I will overcome the obstacles on my way. I will fight against the patriarch. Let the stars be my witness, here I take an oath.”